Naval Battle in the Sino-Japanese War 1894-1895: Reminiscent of Hokusai’s famous woodblock of the Great Wave (神奈川沖浪裏)

War is horrific, but for most of history, unless you were a direct participant or a victim, you would not be fully aware of this fact, as those in power were able to control the presentation of conflicts and, thus, censor the images and stories that were presented to the public about the war. Such monopolistic control remains firmly in place in many states but it has always been partial, as demonstrated by the popularity of the war poets of WWI and the Vietnam war veterans who become public protestors after their return. More recently however, the true horror of war has become even more accessible due to 1) the growing ubiquity of camera phones across the world and 2) online media distribution. Two recent illustrations of such trends are the tragic images of dead and injured children that spread across the world during the conflict in Gaza and the gruesome beheadings shown in ISIS’ terrorist propaganda. Such images are admittedly presented in heavily edited versions in traditional media but their full unedited horror is now easily accessible to anyone with internet access and the required motivation. 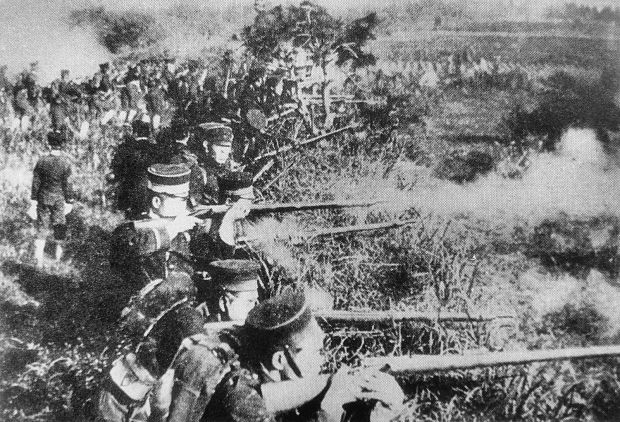 A new web exhibition of Japanese and Chinese propaganda prints depicting the Sino-Japanese War of 1894-1895, jointly created by the British Library and the Japan Center for Asian Historical Records (JACAR) in Tokyo, illustrates just how far the presentation of conflicts has been transformed over the past 100 years. The images in the online exhibition are stunning and reflect how the events of the war were depicted and recorded by people at the time (although mainly those commissioned by the relevant authorities). The presence of prints from both the Japanese and Chinese sides also enable us to see clearly just how interchangeable heroic and villainous motifs are and how readily they are applied. Although photographic technology existed at the time of the conflict and there were photographs produced (see one example above), it was prints that were the main news media of the time. The prints were primarily produced using traditional woodblock technology and this lends them something of a historical/classical atmosphere when viewed today. Yet despite their undeniable beauty it is always important to remember the real horror and suffering that lurks behind such stylised representations.

Below I’ve selected some of the images that I found most striking but I would recommend that people take the time to view the full collection and read through the exhibition site for themselves. It is also perhaps worth mentioning that the majority of the images are from the Japanese side so there is an unavoidable imbalance in the images below and the exhibition itself.