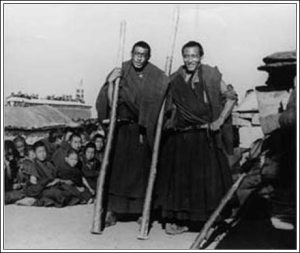 My recent post discussing the Dalai Lama reminded me of an interesting article I read a number of years ago about a rather unusual category of monks that existed in the monasteries of Tibet- the Ldab Ldob (dabdos) or, as they have also been called, ‘Punk monks’. These monks, who were an established and accepted part of the monastic community earned the moniker ‘punk because there time in Tibetan monasteries was spent engaging in violent duels, competing in intermonastery sporting events and rather infamously kidnapping young boys for sexual pleasure.

As such, they don’t just contradict the romanticised image of Tibetan monastic life but they grab that image, beat it senseless, steal all of its belongings then kick into a ditch and tell it not to come back and bother them again. They also illustrate how the real situation is often far more interesting and complex than any simplistic fantasy version can be.