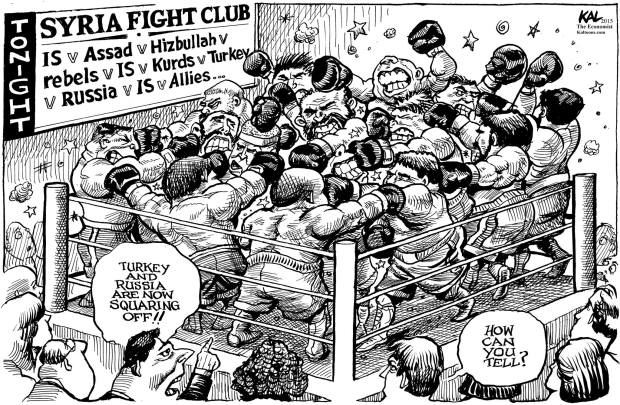 From Kevin Kallaugher at the Economist

I’m writing this post in the wake of the UK parliament passing a vote to support the expansion of aerial attacks against ISIS in Syria (they are already involved in action against them in Iraq). To state my position upfront: overall I agree with military intervention by Western powers against ISIS, and in Syria more broadly (including against Assad’s brutal regime) and I agree with the UK lending its support to such efforts. Yet, I also agree with those who maintain that the UK government’s current strategy does not seem likely to be successful. Specifically, all the well-informed military analysts I’ve heard have repeated the same mantra: aerial bombardment without complementary ground troops will be unable to rout ISIS. Furthermore, Assad’s forces are responsible for inflicting suffering on a much grander scale and as such attacking his opponents, no matter how distasteful, has the potential to prove disastrously counterproductive.

However, my primary motivation for making this post is not to try and justify my position but to lament the bipartisan grandstanding surrounding the Syrian intervention on both sides of the debate. Increasingly, it feels like the UK is slipping into US style bipolar politics, as was evident with the recent election campaign and its ‘fear the Scottish’ tenor (masterminded by Lynton Crosby and his ‘wedge politics’). Cameron labelling all opposition to Britain’s involvement as ‘terrorist sympathisers’ is a clear illustration of such binary thinking and has the reek of cynical opportunism. His refusal to apologise during the 11 hour debate that followed, despite the repeated requests, was also depressingly consistent with his sound-bite focused, morally bankrupt leadership. In summary, I still really don’t like David Cameron or the general policies of the current Tory government.

And yet… I find the liberal anti-interventionist rhetoric to not be much better. Instead of recognising that politicians, or people more generally, could genuinely disagree on whether intervention against ISIS will be beneficial or harmful, the most selfish motivations or profit making conspiracies are presented as indisputable facts. Similarly, any left wing politician who disagrees with ‘Stop the War’-esque rhetoric is immediately labelled as a closet Tory, traitor, morally bankrupt, war monger, or worse. It is theoretically possible that all those supporting British involvement are morally bankrupt capitalists, purely concerned with increasing their personal profits from untold conflict and suffering, but it is not actually very plausible (Jonathan Haidt’s research should be required reading for those who want to demonise the OTHER side of the political spectrum).

To illustrate the problem: Yesterday, a British friend, after declaring that the UK will kill ‘millions’ in Syria, asked what gave David Cameron the ‘right’ to take the UK into Syria. Well, the answer unfortunately is DEMOCRACY. The conservatives won a majority in the general election, and then won a majority for the Syrian intervention in the Commons, following an eleven hour debate. Whether the intervention is justified, will have the desired effect, or will be waged sensibly, are all different (important) issues but if you value democracy you have to live with outcomes you don’t agree with and it doesn’t necessarily mean the system is broken.

This is also incidentally why it should be of concern to liberals whether the Labour leader Jeremy Corbyn can attract a majority in an election. If people dislike what the Conservatives are doing in power then a primary goal should be to ensure they are defeated in the next general election. Protesting from the opposition benches, or outside of parliament, is never going to be as effective as being the party in charge. It’s not just cynical pragmatism to be concerned with elections.